So, after my incredible 3 week adventure through the North Island of New Zealand, I met Federico in the Auckland airport, ready to set off on another adventure- this one in Southeast Asia. We had been planning the trip for several months while living in Queenstown- poring through travel guides, looking up different destinations and activities, evaluating transportation options, etc.- and finally, LAUNCH DAY had arrived. It was good to see a familiar face upon my arrival at the airport in Auckland- I had been traveling alone for the past three weeks, and though I had met HEAPS of cool people along the way, I was glad to see my amigo, and was excited to get the next phase of The Expedition underway.

Our first destination on our tour of SE Asia was Hong Kong, and we knew we had a looooong travel day ahead of us to get there. We were scheduled to fly from Auckland to Bangkok (approx. 12 hours flying time), then had a 7-hour lay-over in Bangkok before flying to Macau (2 hour flight), followed by a 2 hour ferry ride from Macau to Hong Kong, and finally had to locate and make our way to our hostel in the mega-city of Hong Kong. A trial by fire for a couple of relatively new world travelers, for sure… As with the beginning of any great adventure, we boarded the flight out of Auckland bubbling over with excitement and anticipation. The Expedition was moving into uncharted territory! 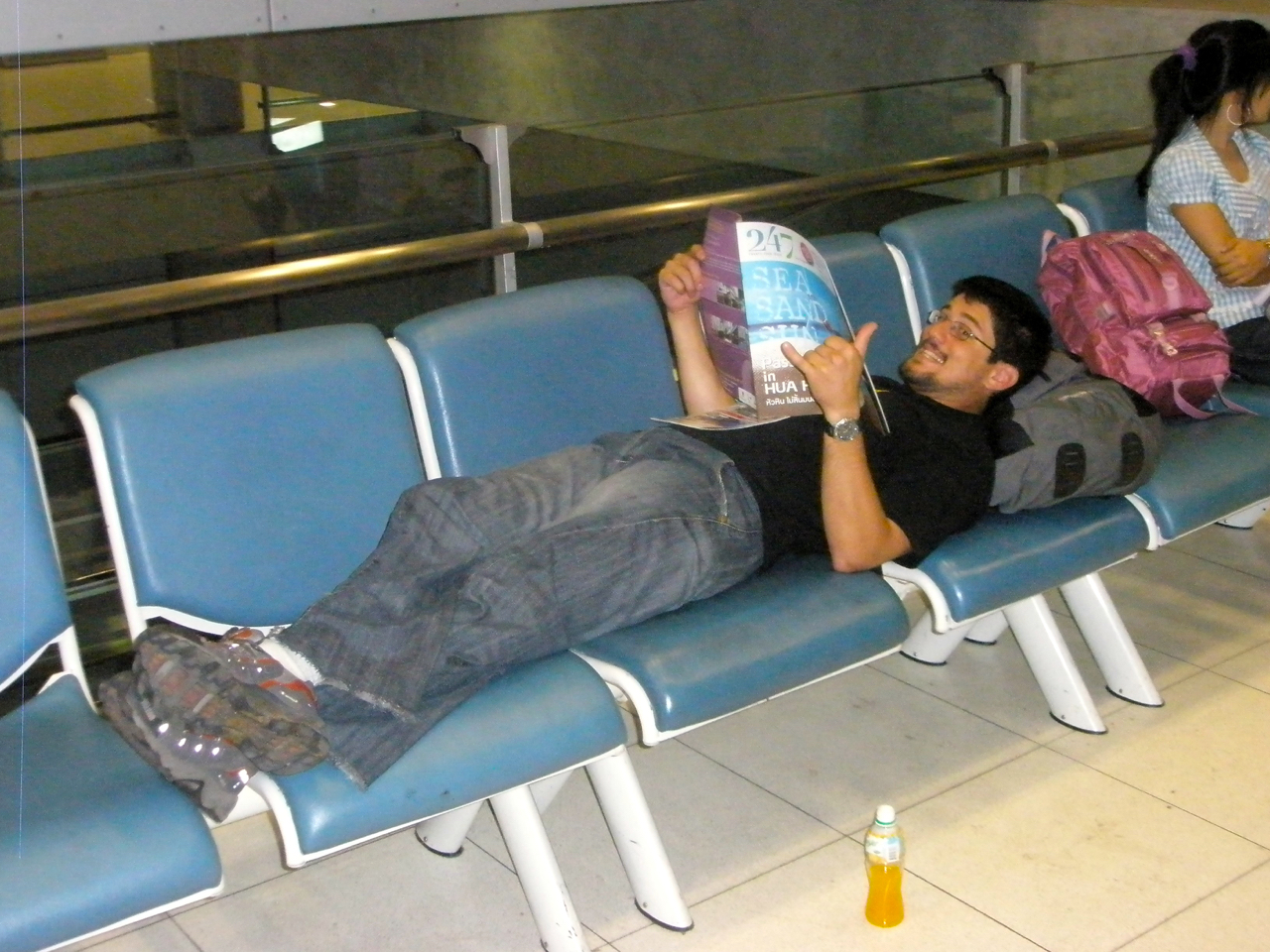 'Relaxing' in the Bangkok airport...

The flight to Bangkok went off without a hitch, and we arrived on time, gathered our bags, and set out to find a suitable place to camp out for the duration of our layover. We were hesitant to go in through the security checkpoints, as we didn’t know and couldn’t get any answers about food or services within the main departure terminal. All we could find outside of the terminal was a dingy coffee shop and a Thai excuse for a 7-11. We made do, and ended up scoring a section of bench seats in the lobby that would allow us to lay down for awhile, albeit very uncomfortably. Fede tried to pass the time by perusing the Thai newspaper, but that didn’t last too long, as it was in Thai (Go figure…). Regardless, somehow, we whiled away the hours- snoozing, reminiscing about good times in Queenstown, and planning out our pseudo-itinerary in SE Asia. Finally, we thought we should make our way up to the security checkpoint to pass through customs and immigration and head to the gate.

We got to Security, only to find HUGE lines at every passport kiosk. For some reason, they were taking FOREVER, and we started to get nervous… As the minutes ticked away, we came to realize that if we didn’t do something soon, there was no way we were making that flight- the lines were just not moving. Of course, with me being the “American traveler who goes above and beyond to avoid being viewed as the stereotypical “American Traveler””, I didn’t really want to make a scene of trying to push to the front of the line. What were we going to do- cut in front of everyone else in line, just because we were dopes and hadn’t checked in early enough? We had been in the airport for SIX HOURS, and we were STILL scrambling to make the flight on time. Ridiculous.

Luckily, I had the Argie with me, and he wasn’t afraid to do whatever was necessary to make it through the line. He went up to the front, pleaded with the security agent, spoke to some of the people in line, and before we knew it, we were at the front, getting out departure stamps and moving on into the departures terminal. We were literally RUNNING through the terminal in an effort to make it to our plane, which, of course, was at the very last gate. It was then, mid-sprint, that I noticed how nice the Bangkok airport is- it’s HUGE, full of all kinds of shops, food stands, real coffee shops- everything we had been looking for on the outside for the previous 6 hours. Of course, at full-gallop through the terminal, the aforementioned shops and coffee stands a blur as we whizzed past, the irony was lost on me in the moment.

A voice over the loud speaker- with a hint of a Thai accent- confirmed the urgency to the moment- “Paging Mr. Tilley and Mr. Moser- your flight has boarded and is ready for departure. Please report to your gate immediately- the other passengers are waiting for you.” Not good. We rounded the last corner to see an empty departure lounge, with a few Air Asia ticket agents standing idly by the entrance to the jetway. Almost falling over each other as we tried to slow down and get our tickets and passports out at the same time, we were relieved to see that they hadn’t closed the door yet. “Mr. Tilley and Mr. Moser, I presume?” she said, trying to suppress a giggle as we handed her our boarding passes, gasping for air. A “Thank you for waiting” and a “Muchas gracias amigas” later, and we were on board, still panting and sweating from our dash through the airport. We made it, and a quick 2 hours later, we were in Macau. 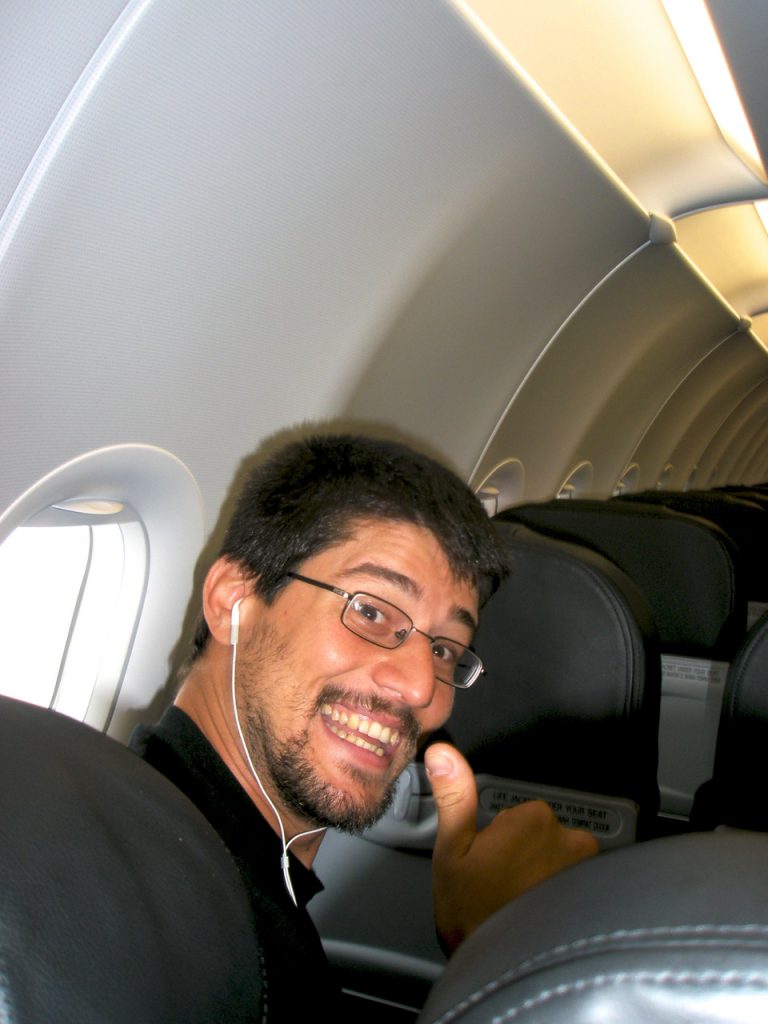 Happy to be on the flight...

Upon arrival in Macau, we took a taxi to the Ferry Terminal, got our tickets for the trip to Hong Kong, and had to wait about an hour before the ferry departed. The ferry ride to Hong Kong was pretty cool- we were on a high-speed “Jet Ferry”, which was about an hour or so quicker than some of the others. They had a movie playing on the video screens, but I fell asleep to the rolling motion of the boat in no time. We arrived in Hong Kong at the Kowloon Ferry Terminal, and then had to negotiate the streets of Hong Kong to locate our hostel. It was around 9 in the morning by now, and we had been traveling for about 24 hours straight, so needless to say, were pretty worn out and just wanted to get there. We hoisted our backpacks onto our shoulders, and took a deep breath for the last push.

We had mapped everything out from the ferry terminal to our hostel back in Queenstown, so we knew we had to cut through a park, take a right, find the main road, and then look for the right address to find our hostel- pretty straightforward, but we were exhausted. In the moment, it seemed like a monstrous task. The surge of excitement that hit us when we found ourselves among the skyscrapers of Hong Kong helped a bit- we were in ASIA, on the first leg of Phase II, and the long travel day was almost over. We just had to suck it up, find the hostel, and then we could relax.

We made our way through the park, seeing heaps of people out enjoying the nice morning, sipping tea, chasing kids, chatting away. Eventually, we came to the main road that passes through the district of Kowloon- Nathan Road. It took us a minute to figure out that we needed to turn right- again, we were pretty exhausted- and then it was a matter of finding the right address. As we wandered down Nathan Road towards Victoria Harbour, we got our fist introduction to Hong Kong- we were assailed with offers from tailors for custom-made suits, street vendors trying to sell us watches and sunglasses, and any and all types of electronics shops hustling to get you in their doors. It was all a bit overwhelming- even more so since we were mentally fried from the unending travel day. “No thanks”, “Sorry mate”, “Maybe later”… They refused to give in, even though it was readily apparent that we had just arrived (Backpacks- a dead giveaway). We kept our heads down and kept walking. 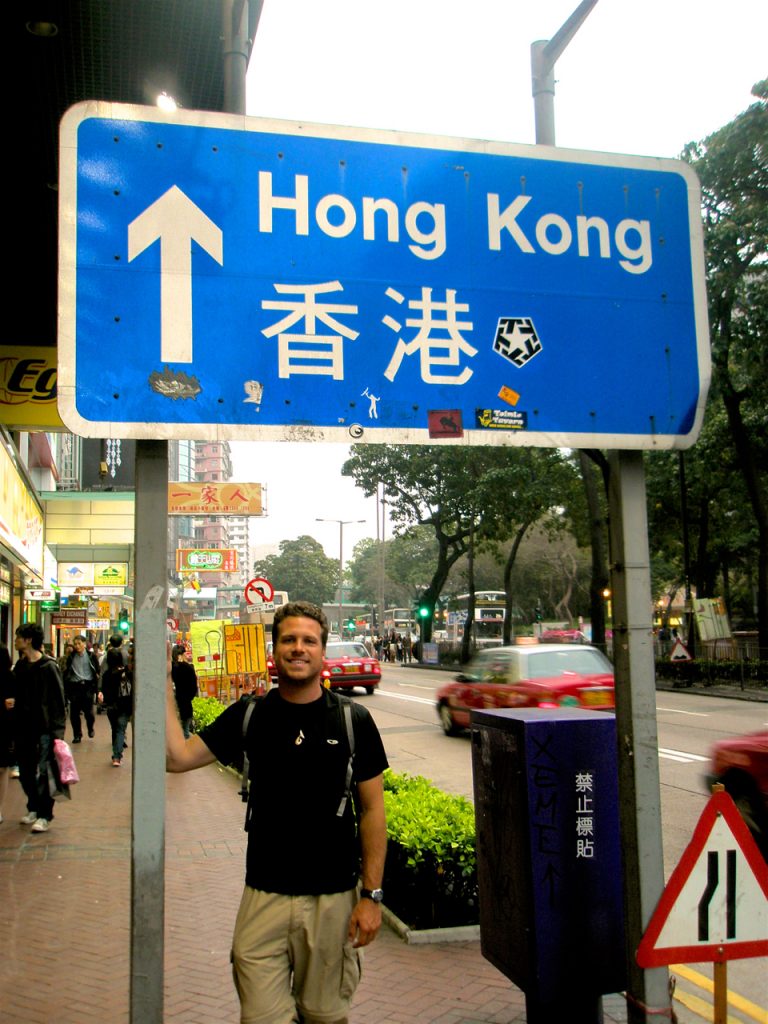 Finally, we came to an intersection, and took a minute to get our bearings. We looked around, and noticed several broken-down, dilapidated tenement blocks on the other side of the street. They looked like a stiff wind could cause them to come crumbling down, they were so old and decrepit. “Hey Fede- thank God we’re not staying in one of THOSE places, huh?” I said, pointing. He looked, and we both had a laugh as we re-shouldered our bags and pressed on. Eventually, we realized that we were on the wrong side of the street, and that the right address should be directly across from where we were. Sure enough, we looked across the street, and saw one of those buildings ‘standing‘ there, waiting for our imminent arrival. Super.

We crossed the street, checked the address, and realized that we had arrived at the incongruously named ‘Mirador Mansion’. HA! It looked like it was straight out of a 1980s movie about Beirut! Shady characters milled about in what passed for the ‘lobby’; more touts and hagglers assaulted us as we tried to negotiate our way through the crowd; we had to wait in line for a particular elevator that only serviced specific floors… After all the incredible hostels I had stayed in while traveling through New Zealand, this was NOT what I had envisioned… 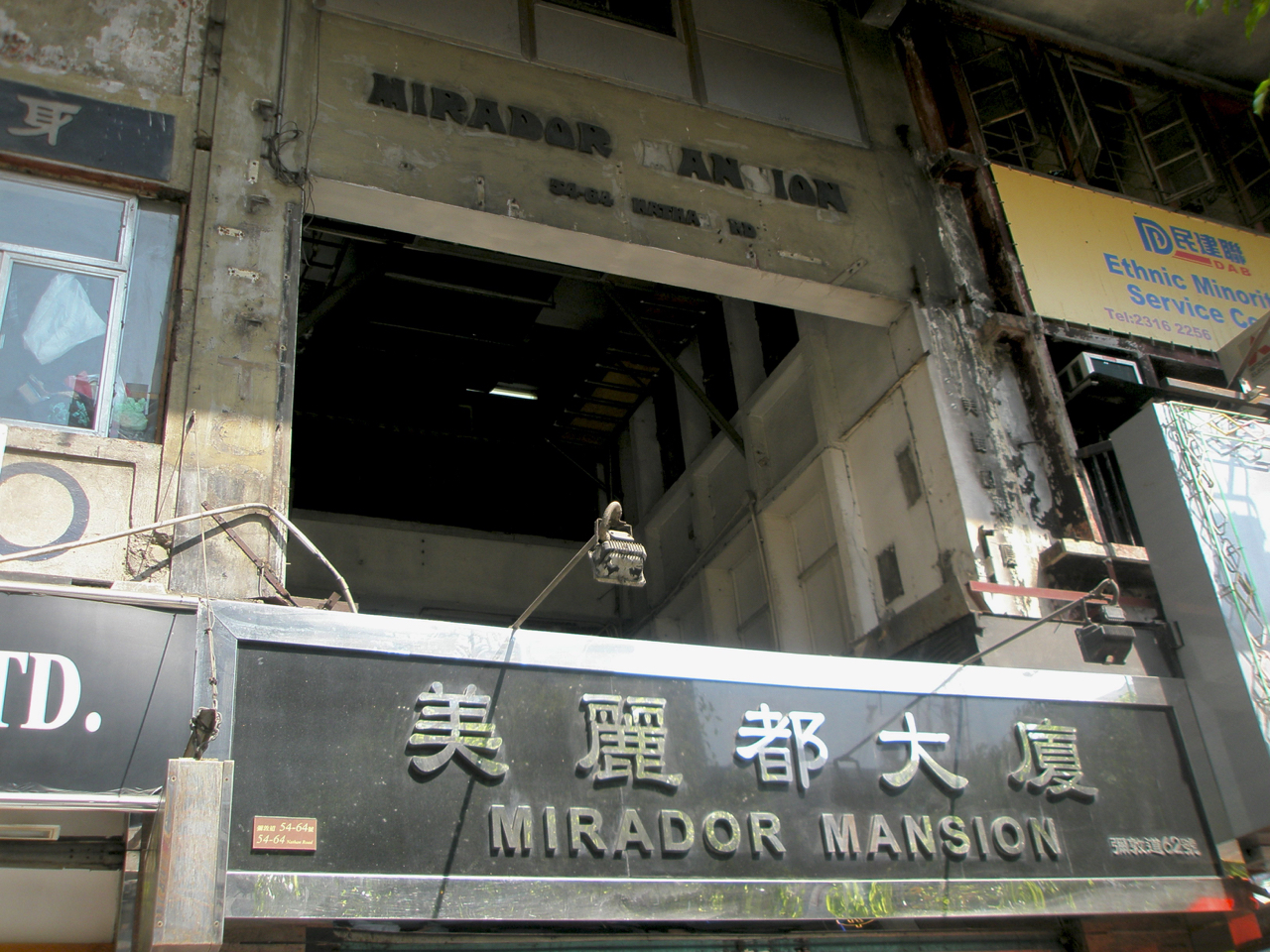 We finally made it onto the cramped and crowded elevator, praying that the cables wouldn’t snap as it creaked and shuddered upwards. We got off at the appropriate floor, and had to search around a bit before we found the ‘entrance’ to our ‘hostel’- it turned out to be a wooden desk in the middle of the exposed hallway, with the rooms off narrow halls that branched off the main hall. We looked around a bit, wondering if (Read: Hoping) we weren’t in the right place, but found that we were. Resigned to our fate due to exhaustion, we reluctantly checked in, and were shown to our ‘room’ (Read: cell). We opened the door to two single beds, separated by about a foot, in a box-like room without any vents or windows, a peculiar odor hanging in the air. The smell was a bit unnerving, but we were both so tired, all we wanted to do was drop our bags, shower, and get a bit of rest. We were soon to find out that the showers were hand-held hoses in the 3 foot by 3 foot bathrooms- sink, toilet, shower, all crammed into that tiny space. A quick cold-water hose-off, a change of clothes, and we felt refreshed enough to venture out into the city. We were in HONG KONG, for crying out loud! Sleep could wait. Besides, we wanted to spend as little amount of time at that hostel as possible… The seemingly never-ending ‘Moving Day’ was FINALLY over, and the adventure was underway! Southeast Asia, HERE WE COME!!! 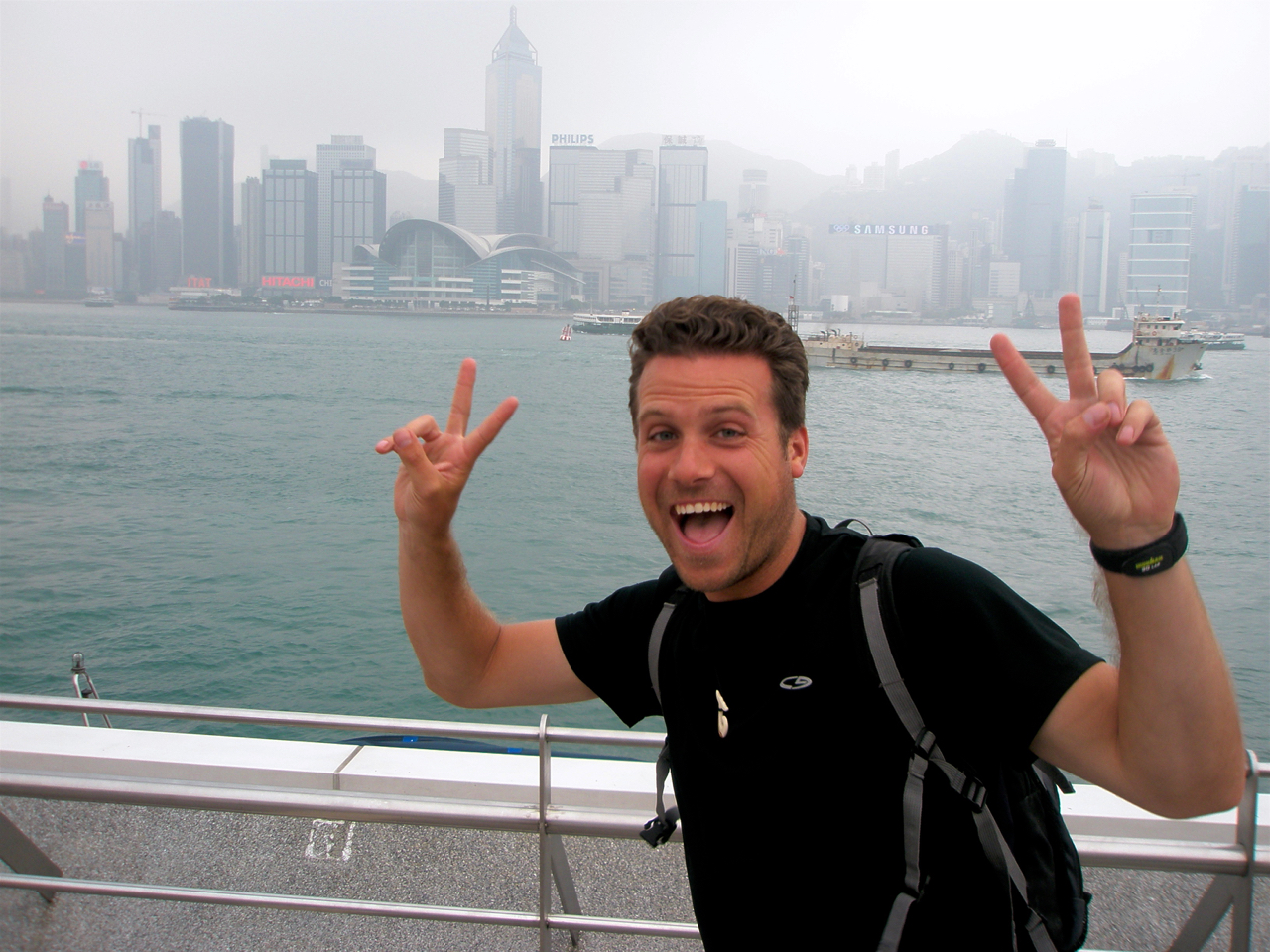 Excited to be in HONG KONG!!!!

To start planning YOUR adventure through Hong Kong, click HERE......