After finally meeting up with my sister, Ryanne, and her friend Holley, we quickly set to the task of figuring out exactly what we wanted to see and do while in Cape Town. We were going to be cramming a lot into a short period of time, and knew we had to use our time efficiently and effectively. I was in Cape Town for 2 weeks before setting out on the rest of my African Adventure, but the girls only had 6 days or so before their safari began. Though I’ve always tried to avoid being the stereotypical ‘tourist’- one who simply checks things off a “To See” list as they whizz around from place to place, never taking the time to experience and enjoy the new country, culture, and environment they are in- I knew that week was going to go something like that. With my sister and Holley on a tight itinerary, it was an unavoidable reality.

We met for breakfast that first morning, and over maps of the city and guide books spread between steaming cups of coffee and a myriad of fresh fruits we had never heard of, decided that the best way to get acquainted with the city would be to take a ride on the hop-on/hop-off tourist bus that ran a circuit in and around town. Not having the time to simply get out and walk the streets- my usual custom when exploring a new place- the tourist bus was the next-best option, and would allow us to reach further out and beyond where our legs would’ve been able to carry us. We downed our cups, grabbed some mystery fruit for the road, and headed out. 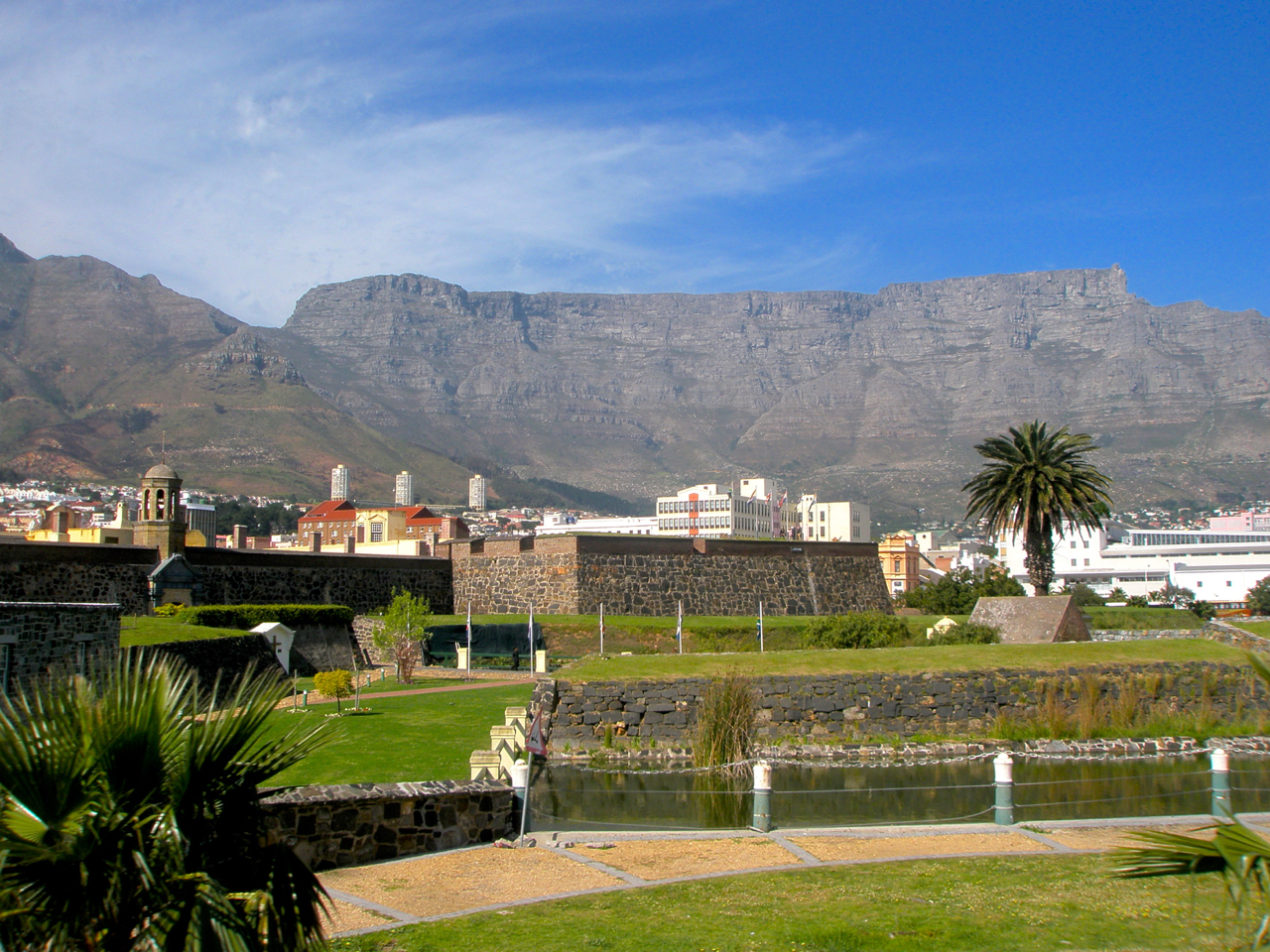 It was a gorgeous South African spring day in Cape Town- a magnificent blue sky spreading over the city, the sunlight glinting off the shiny mirrored windows of the hotel. It was refreshingly crisp out that morning- I imagined Table Mountain was probably feeling a bit cool, lacking its usual ‘Tablecloth’- a unique blanket of cloud that routinely forms along the edge of the ‘Table’ and spills down the slopes towards the coast and the city below. Regardless, it was a PERFECT day to explore.

First things first- we had to stop by an ATM. Finding one in the adjacent convention center, we were getting bank cards out and discussing currency conversions when we were suddenly surrounded by large men in black suits, each wearing sunglasses and an earpiece- security personnel, for sure. “Ummm, we just wanted to use the ATM,” we thought in unison. “Please stand here,” one of them said, rather sternly. (Not that we were going anywhere.) As soon as they had us hemmed in against the ATM, a group of similarly dressed men entered the hallway through the double doors that came in from the underground parking structure. They were surrounding another large man, again dressed in a black suit, but he wasn’t wearing sunglasses or an earpiece. They briskly strode past us without even a sideways glance and hustled up the stairs and out of sight. “Thank you for your cooperation,” the men ‘guarding’ us said, and moved on to catch up with the others without another word. We looked at each other, bewildered. “Who was that??” “Probably some government official or something…” We finished up our ATM transactions, and then headed back upstairs ourselves. As we walked towards the exit, the helpful security guard was smiling at us. “Did you see the President?” he asked. The President? We looked at him, then at each other, astonished. “That was the PRESIDENT? You mean, the PRESIDENT of South Africa??” “Yes, he is here for some government conference.” “Amazing,” we thought. If that had been the President of the United States, they would’ve had the building shut down, the streets outside blocked off, and there would be absolutely NO-ONE in the area that wasn’t supposed to be there, yet there we were, standing at the ATM while the President of South Africa passed by, a mere three or four feet away from us. Incredible. That was something that definitely was NOT on our itinerary for the week- an unforeseen bonus- but hey, that’s traveling! 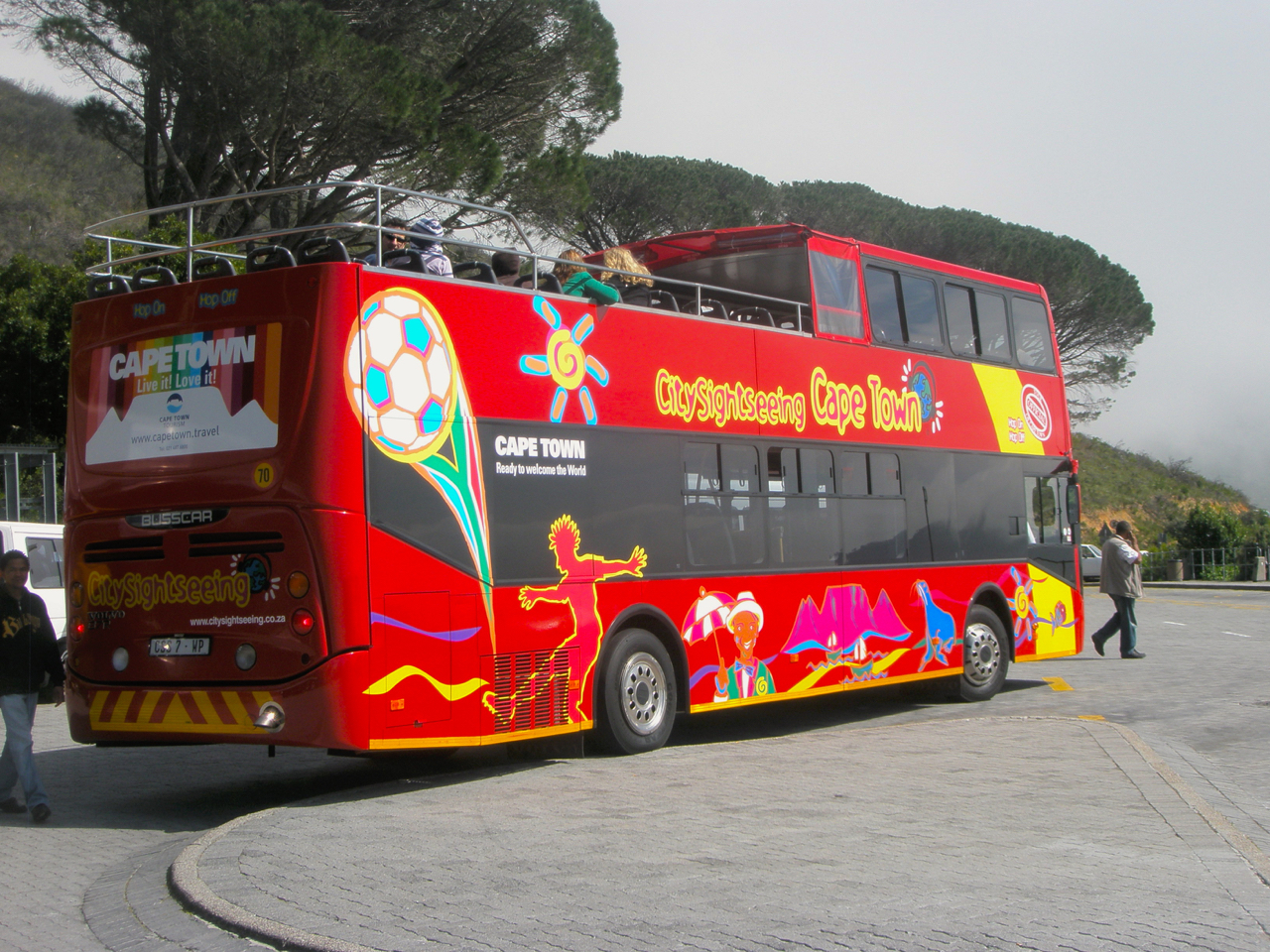 After our brush with celebrity, we headed back out onto the street to wait for the big red double-decker tourist bus to pick us up and set us off on our Cape Town adventure. Once we boarded, we found some empty seats together on the open upper deck, plugged in our earpieces, and got our cameras out- it was time for our introduction to Cape Town! 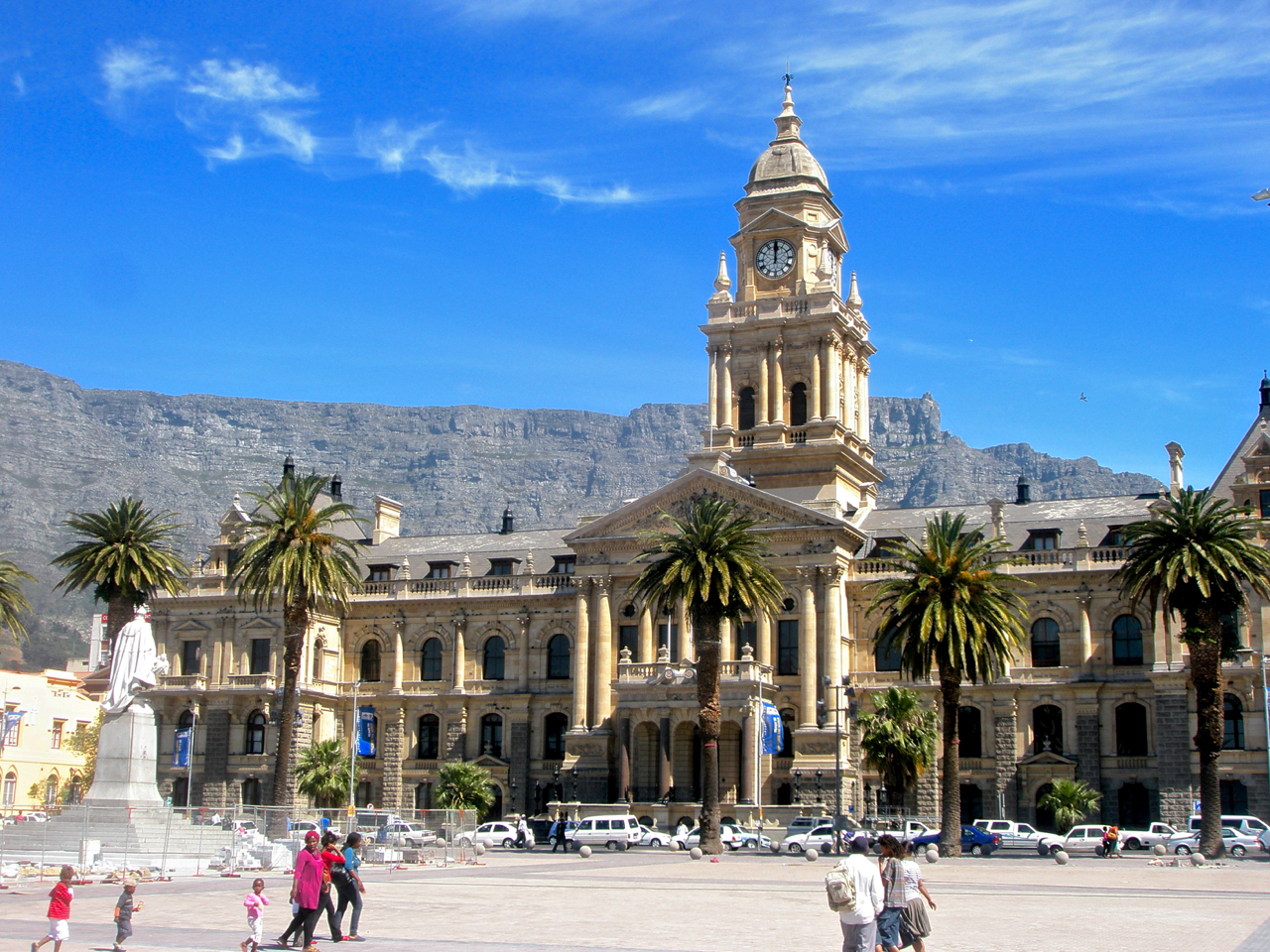 The bus turned out to be the PERFECT way to start off our week in Cape Town. We learned so much about the city itself- its founding and development, all the way up through the Apartheid period and into present day- along with the significance of numerous monuments, buildings, churches, fountains, etc. that lined the route. As we meandered through the streets, we made notes of places we wanted to come back to explore more later- The Gardens (a small park in the middle of the city), the Art Museum, the District 6 Museum, Bishop Tutu’s church, and the Castle of Good Hope (the old star-shaped Dutch fort that the original settlers lived in). The oratory described all of these in brief, piquing our interest for a return visit later in the week. As past experience has taught me, a guided, non-physical tour of a new place is a great way to help nurse oneself over a bout with jet-lag- it usually requires only that you listen and observe, easy tasks for a weary traveler. Thankfully, our experience in Cape Town was true to form. 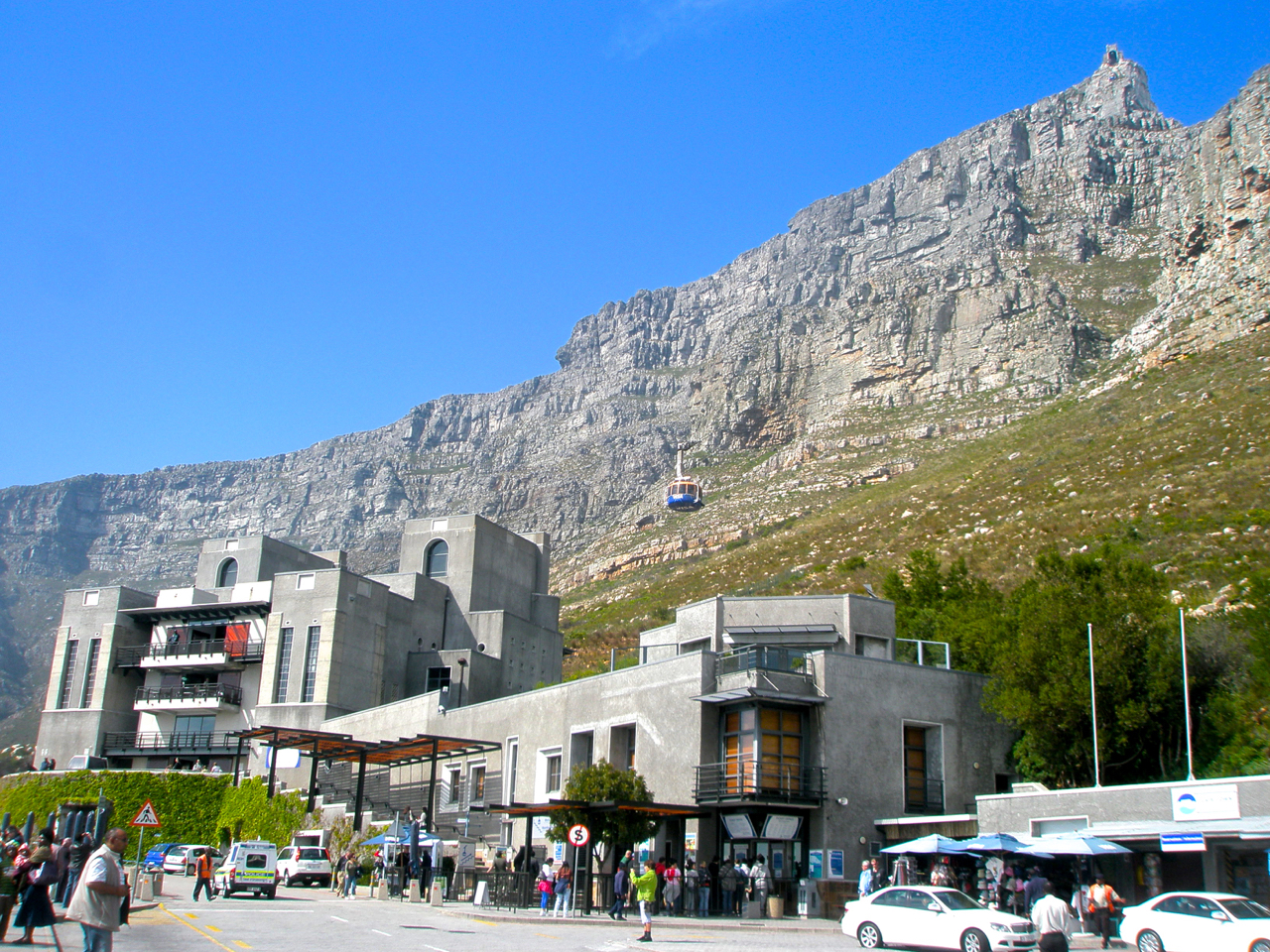 We DID disembark at the Table Mountain Cable Car station- our driver suggested that we take advantage of the beautiful day, for you never know when the “Tablecloth” will show up, and then visibility from the mountain down over the city and the bay is NIL. We got our tickets for the cable car, and filed inside when we got to the front of the line. The Table Mountain Cable Car is unique in that it spins while it is in motion. Thus, you are constantly presented with a new view during your trip. Its an amazingly creative innovation- one that keeps passengers from jostling for position and camera angles during their trips. Its a short ride, at points literally straight up the side of Table Mountain, and before you know it, the doors are opening and you find yourself on the top of the most famous landmark in South Africa. At the top, we piled out of the cable car, anxious to set out and explore. 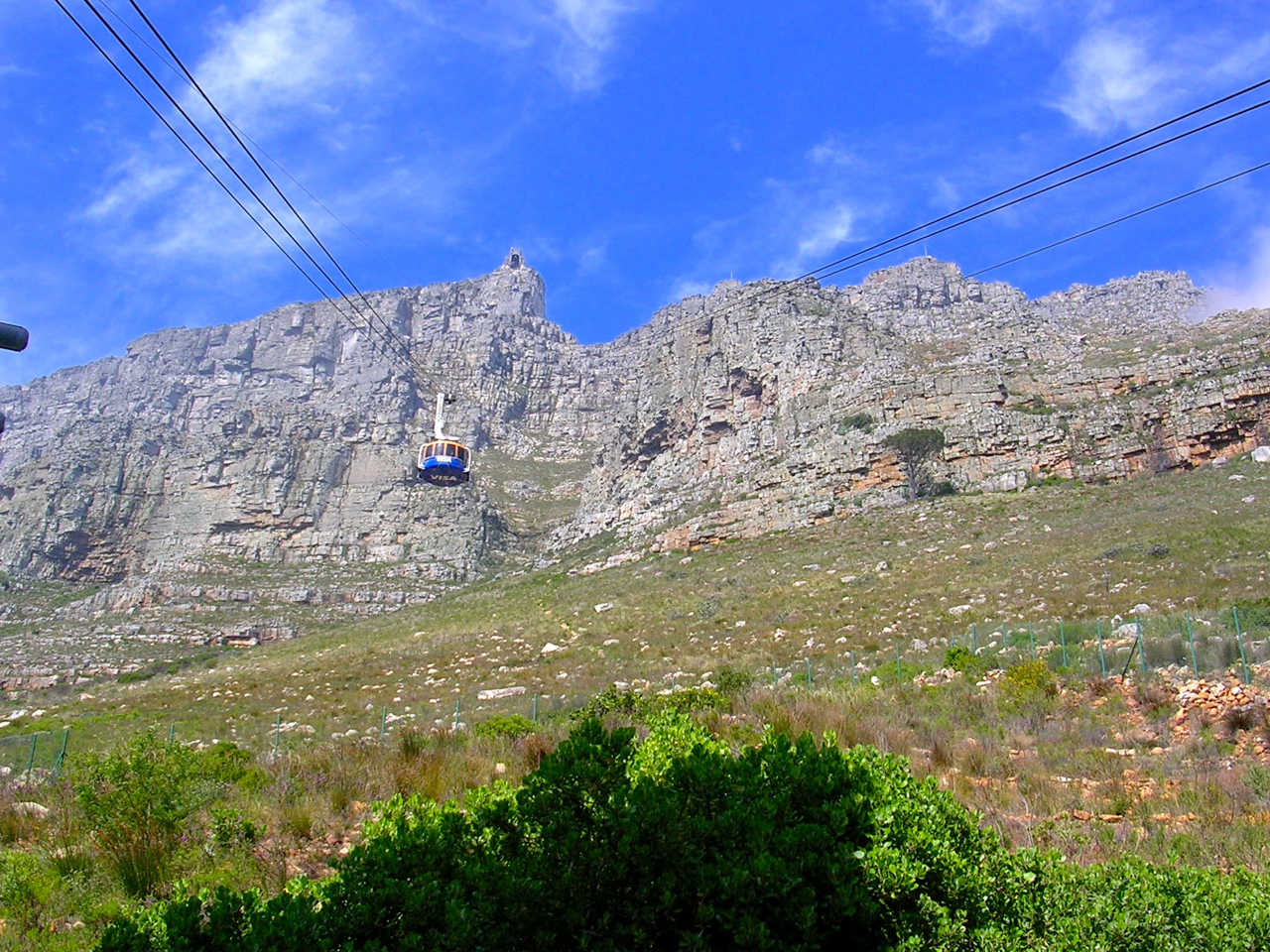 We spent the next hour or two wandering around the “Tabletop”, marveling at the amazing views of Cape Town and the bay below, the Cape Peninsula in the distance, and the sparkling beaches that surround the area. The girls doubted they would make it back up again, still having so many other things to do and places to see later in the week, and wanted to take advantage of the incredible day. We made the most of the weather and the time, and then headed back to the cable car for the trip back down the mountain. 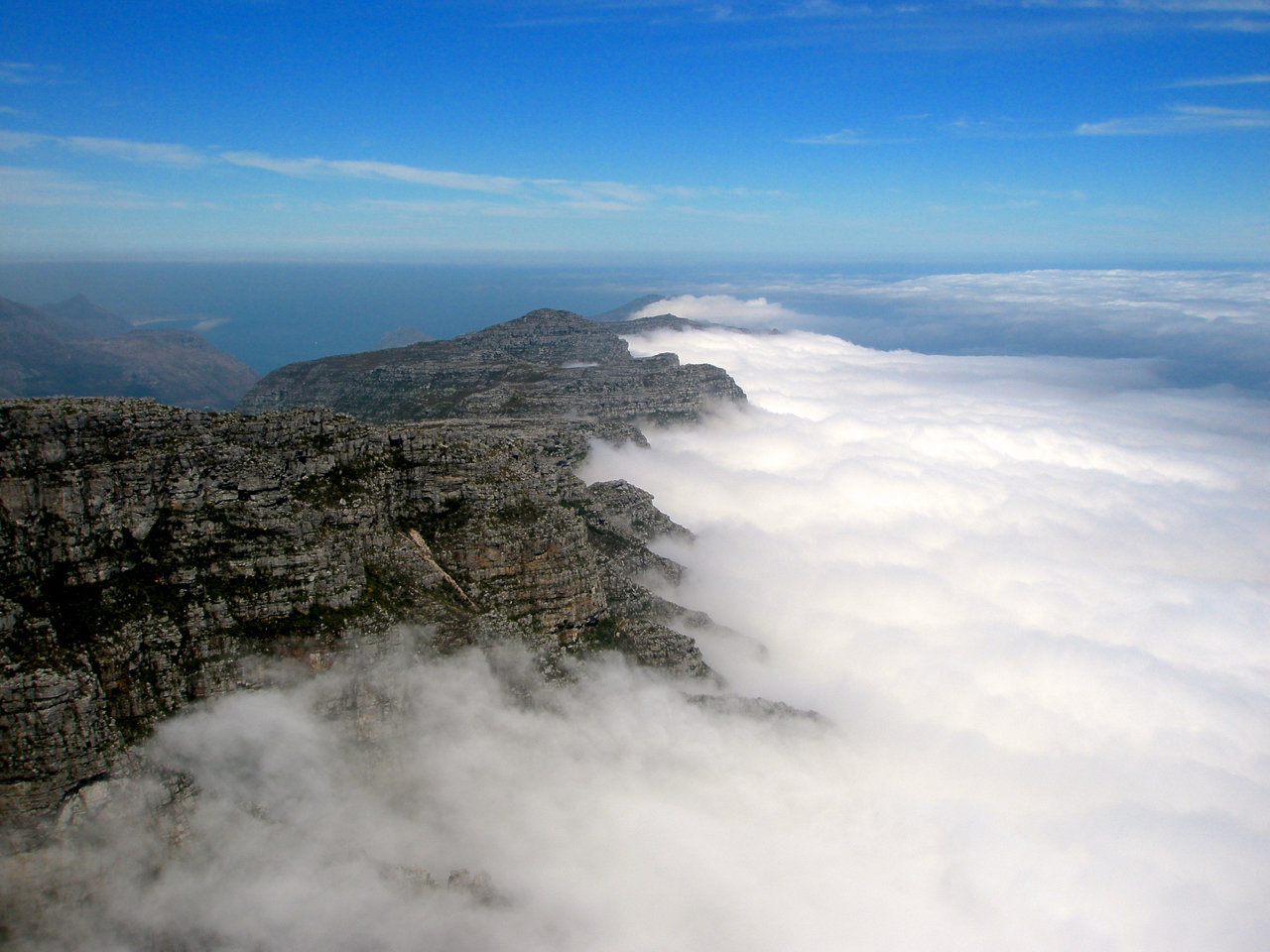 Awesome views of the clouds packed in along the coast... 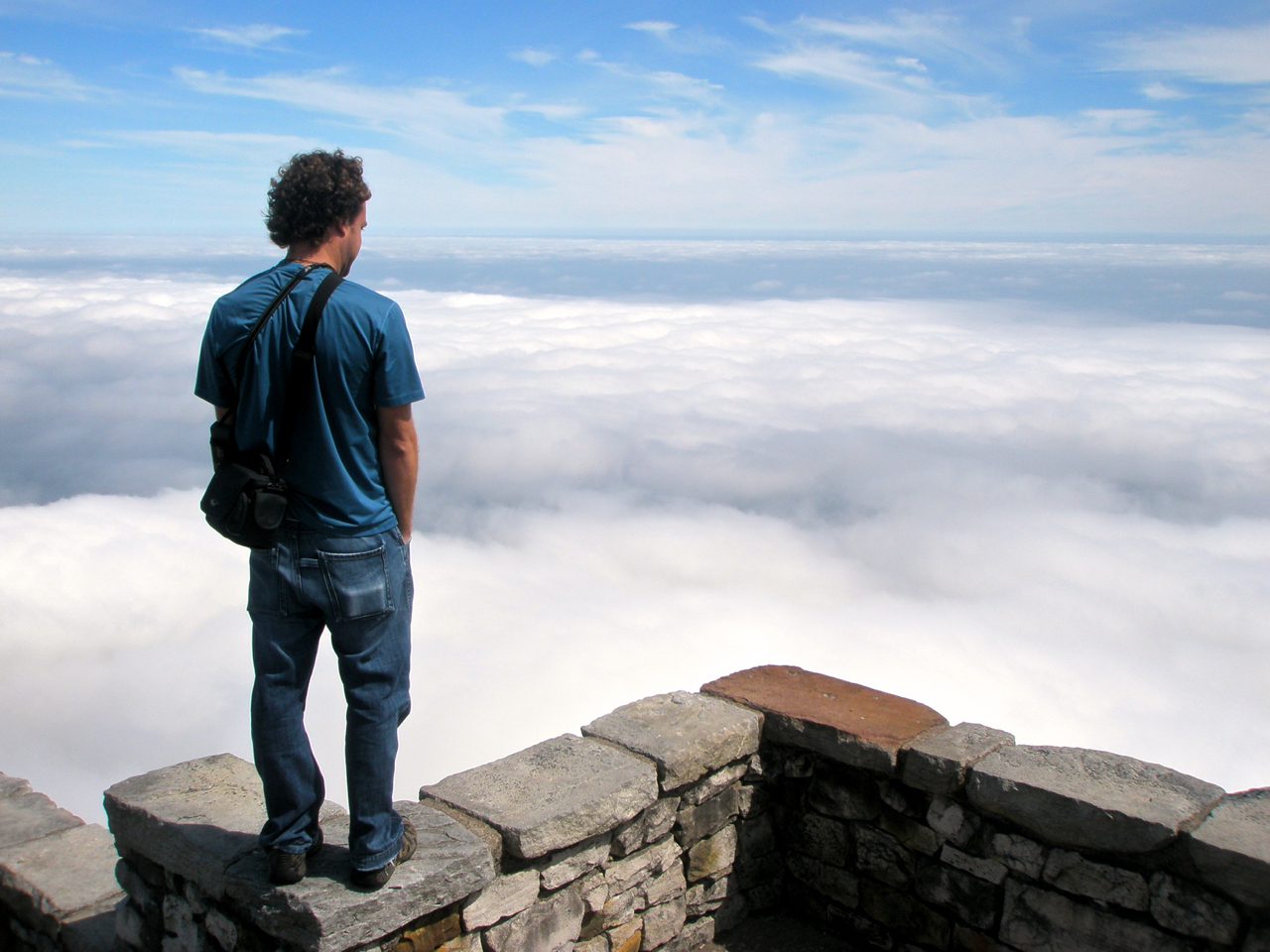 Above the clouds on Table Mountain

The rest of the afternoon was amazingly pleasant as well. We hopped off the bus in Camp’s Bay- a beautiful little beach-side suburb that we had seen from on top of Table Mountain- to find some lunch, and ended up spending much of the afternoon there. After lunch, we all had a little snooze on the sun-warmed rocks, and then headed back to catch the bus again. 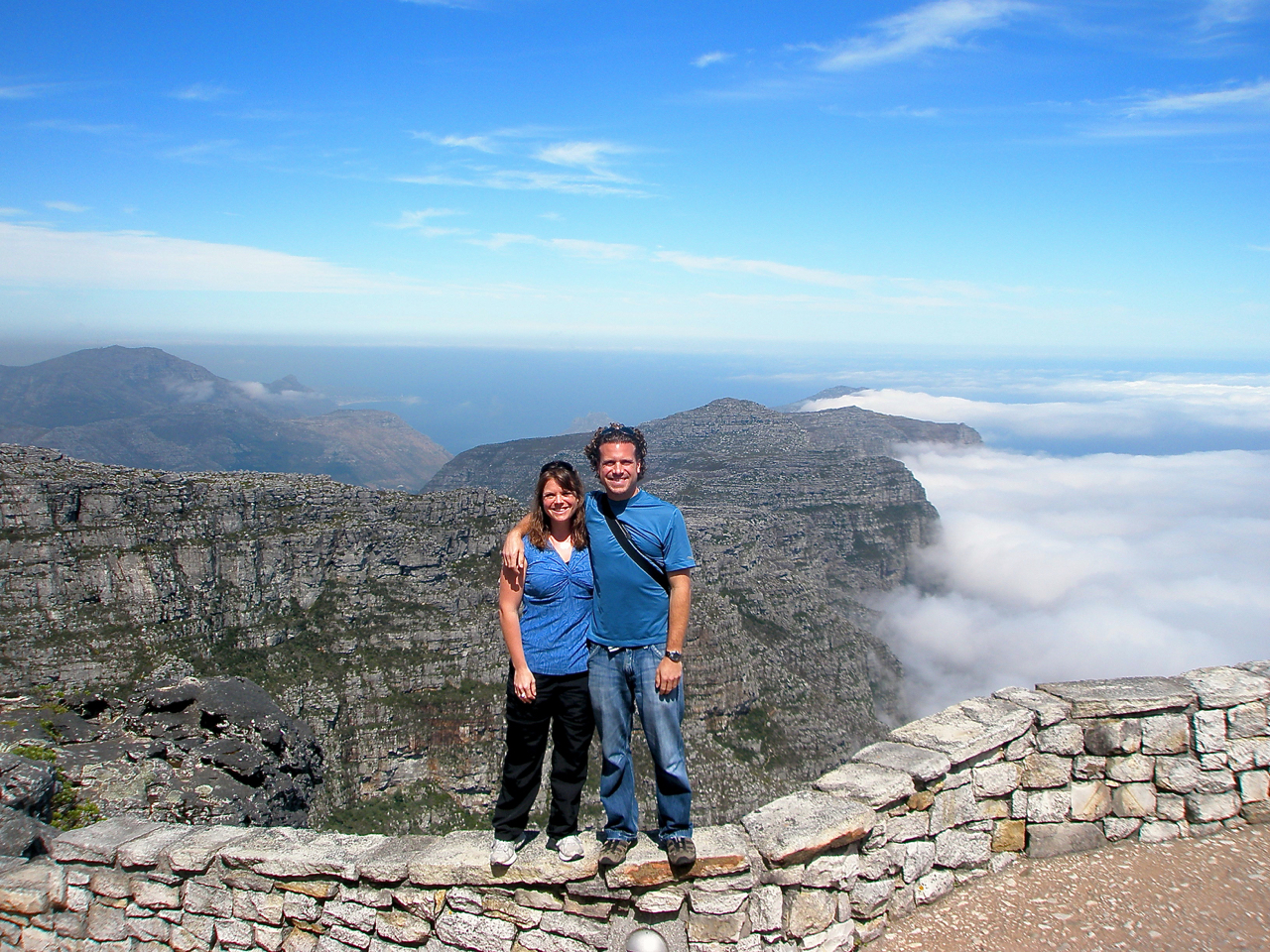 Happy to be hanging out with my sister on Table Mountain

The final part of the bus tour took us through more seaside suburbs, along the V&A Waterfront, past Green Point Stadium- one of the stadiums built to host the 2010 World Cup- and finally back to the girls’ hotel. What a day! What an adventure- we all had an incredible time on the Big Red Bus, had learned a TON about Cape Town, and were all somehow even more excited than before to get out and explore. Again, it was the PERFECT start to our week in Cape Town. Bring on Day 2! 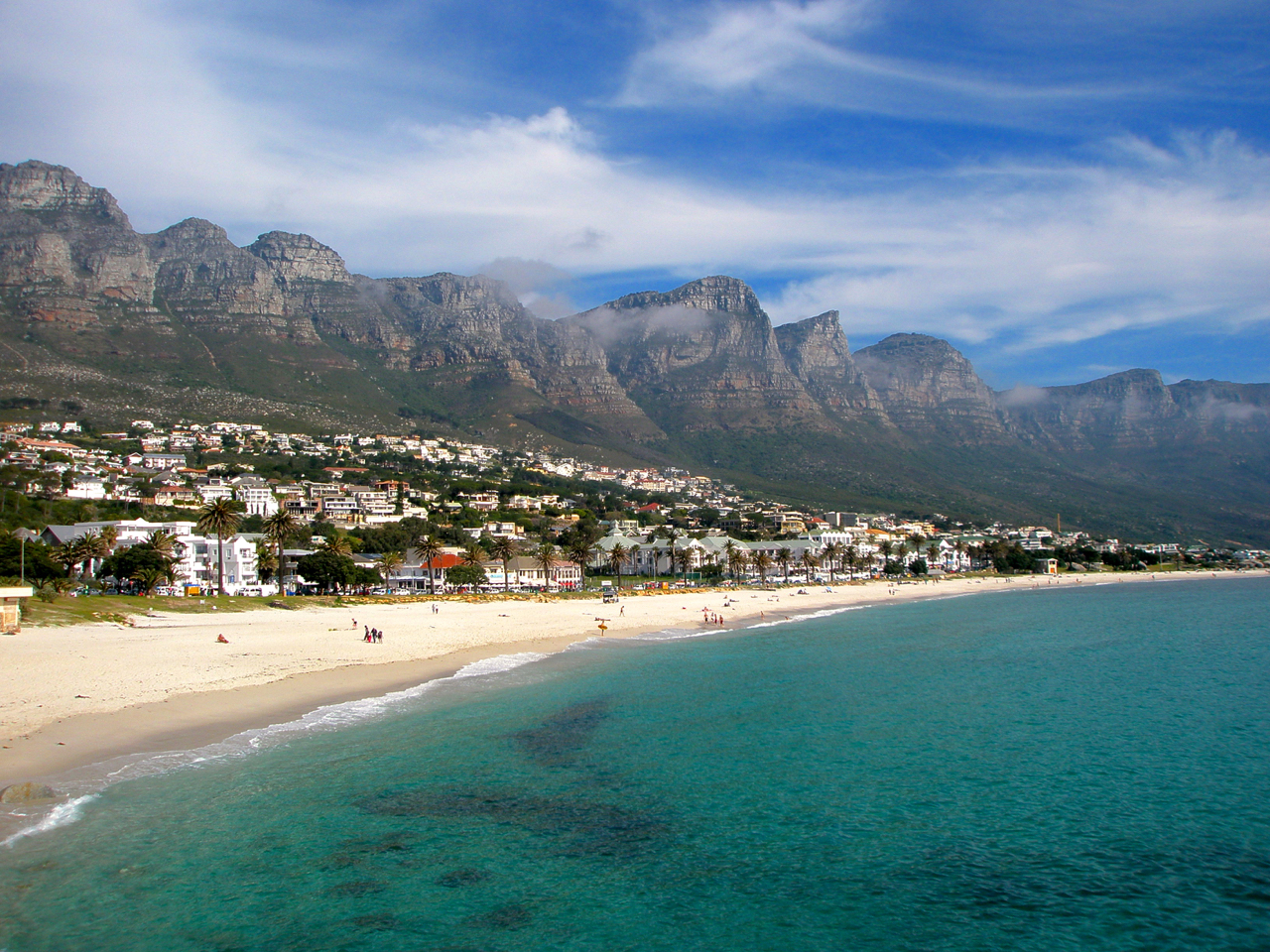 To start planning YOUR adventure in South Africa, click HERE......