A Wild Ride on the Shotover River

A Wild Ride on the Shotover River

So, occasionally, some of the businesses in Queenstown have what they call ‘Locals’ Day’- a day where they lower the rates of their offered activities so that those that live nearby can take part without breaking the bank. With the primary function of most of Queenstown’s tourist industries being milking every last penny they can out of visitors, activities in town can be a bit (Read: ridiculously) over-priced. In order to keep a good working relationship with the local residents, these businesses cut them a break once a year. Seems fair enough…

One of the primary activities on offer in Queenstown is ‘jet-boating’- the thrilling experience of strapping yourself in to a boat-sized jet ski, 4 people wide, and screaming your lungs out while hurtling through narrow river canyons, the walls of which are mere inches away from the sides of the boat at most times. I had wanted to do it for awhile, but wasn’t about to pay the ‘Tourist Price’. Enter ‘Locals’ Day’. 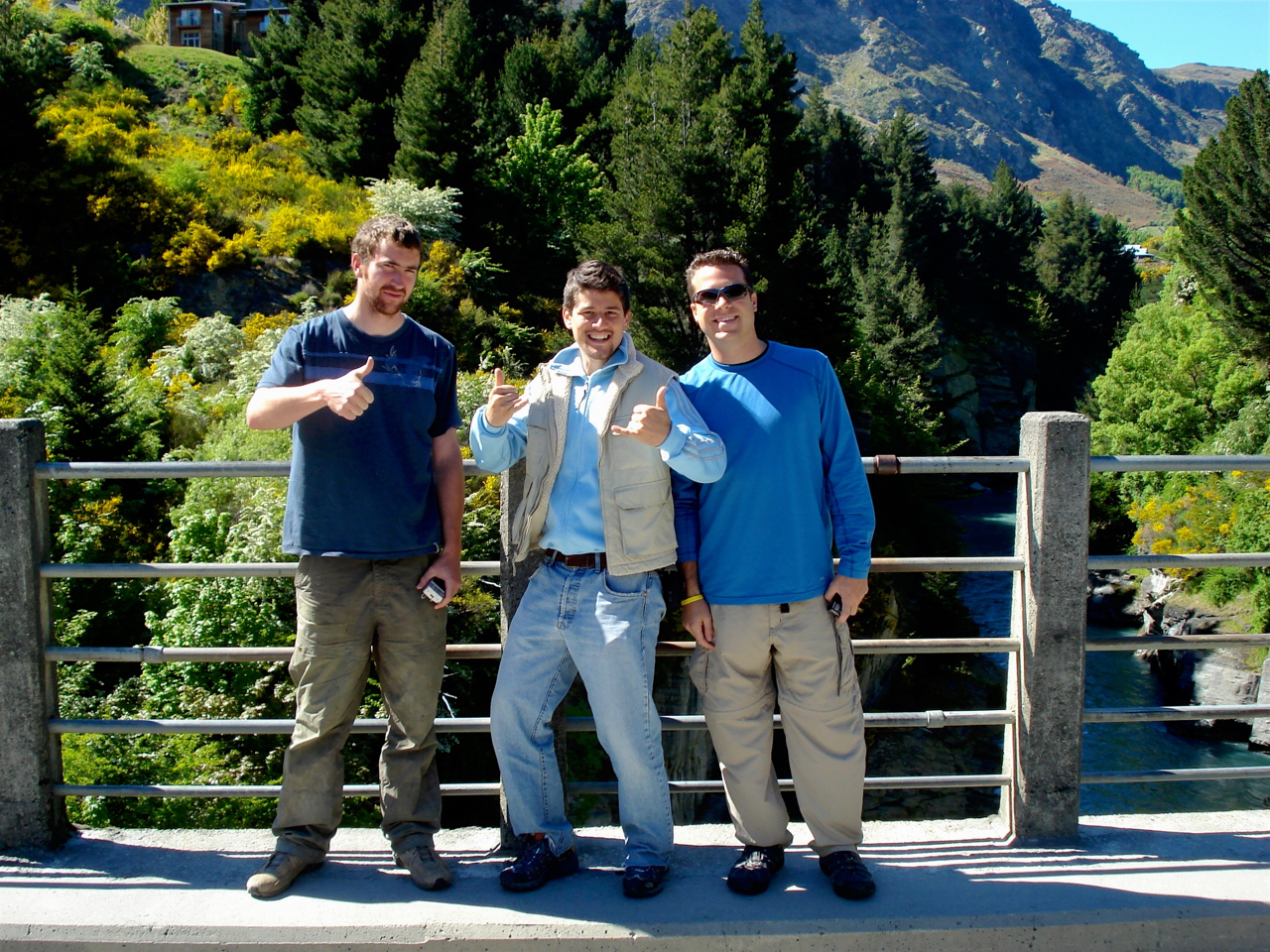 Neil, Fede, and I- ready to go JETBOATING!!!

There are a couple different companies in Queenstown that have exclusive rights to the nearby rivers. Fede found out when one of these companies was having their Locals’ Day, so we made sure we were up early (Locals’ Day usually attracts a pretty good crowd, no matter who is having it), and headed out to get our place in line, excited about the prospect of a real ‘Kiwi-style’ adrenaline rush.

We arrived around 9am, only to find we were the late-arrivers on the day. We booked a 2:15pm trip time, so had several hours to kill before we were to get our turn on the river. Luckily, it was a beautiful day, they had a little cafe whipping up coffees, and there was plenty of open space around to kick back and relax until our time came. We chatted with some familiar faces from town, snapped a few photos of the amazing landscape, and just lounged around, snoozing on the cool grass in the warm sunshine. 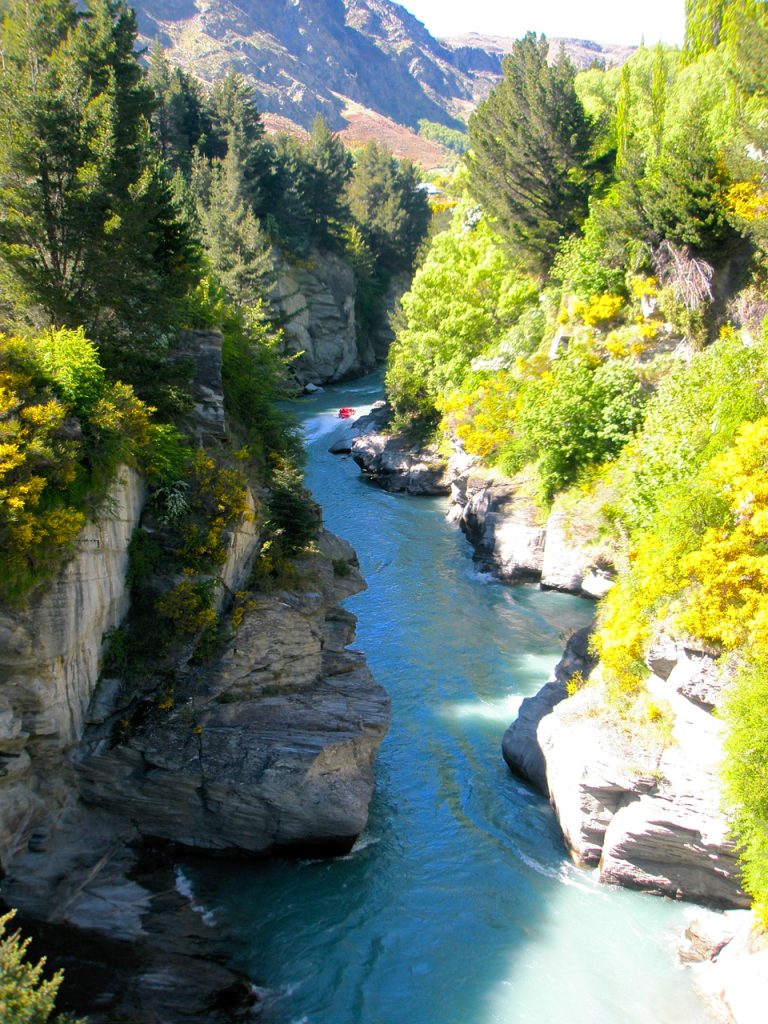 The beautiful- and NARROW- Shotover River

Finally, our number came up, and we headed down to get ‘suited-up’ for the ride. Spray ponchos and life jackets fitted, hats and sunnies put away- at last, it was time to go for a ride. We hopped in and secured our safety belts. It felt like we were getting ready to go on a ride at an amusement park… We were pretty excited.

Our driver made a few lame jokes about seasickness and where to store our carry-on bags (It has got to be tough telling the same bad jokes 365 days a year), and then- without any warning- he hit the gas. WHAM! We were OFF! 0-60KMPH in 0 seconds- we were tearing off through the blue-green water, sheer canyon walls of grey granite towering above us on both sides. Laughing and yelling, Fede screaming “Faster!  FASTER!” as we wove around rocks and in and out of blind turns in the river. Then, out of nowhere, the driver ripped the steering wheel to the left, sending the boat into the tightest 360-degree spin imaginable. It had to be, as the rock of the canyon walls couldn’t have been more than a foot away from the boat during the spin. INSANE! We were all trying to catch our breath as the boat came out of the spin, but no luck. The driver slammed the throttle open, and we were off again. 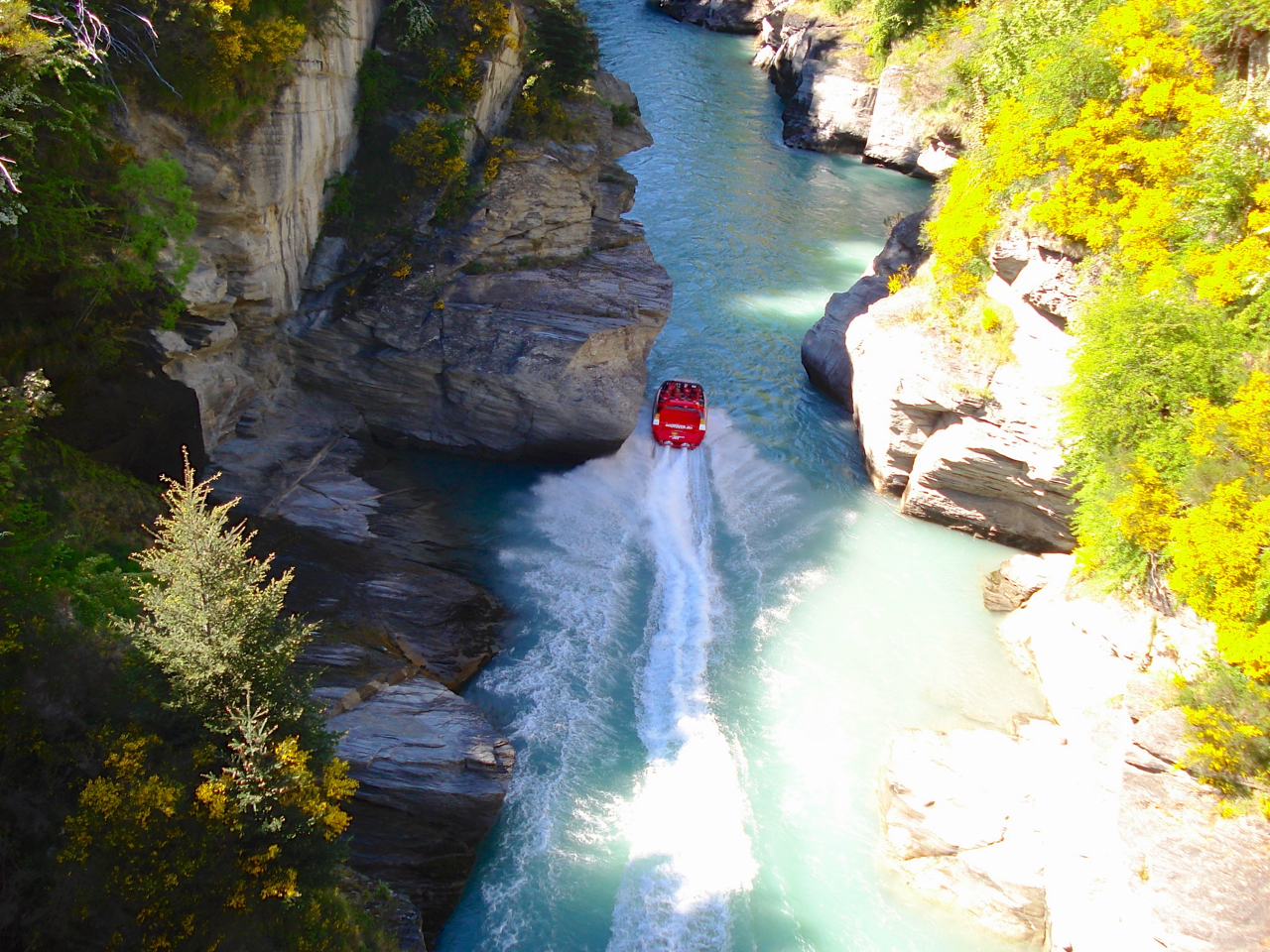 Shooting through the Shotover River

More hair-raising turns, skidding across the water sideways, heading straight into walls before veering away at the last second. At one point on the river, we were going head-to-head with another boat, some crazy game of ‘Jet-Boat Chicken’ I’m sure the drivers play out on a daily basis… Again, it seemed impossible that we WOULDN’T crash, when at the last milli-second, we went right, and the other boat went left. Again, INSANE! It was awesome- we were gasping for breath, trying to get our hearts out of our stomachs as the driver continued to speed through the canyon, whipping the boat through 180s and more 360s, all while wearing this knowing smirk that told us he knew he was doing his job right. It was pretty incredible. 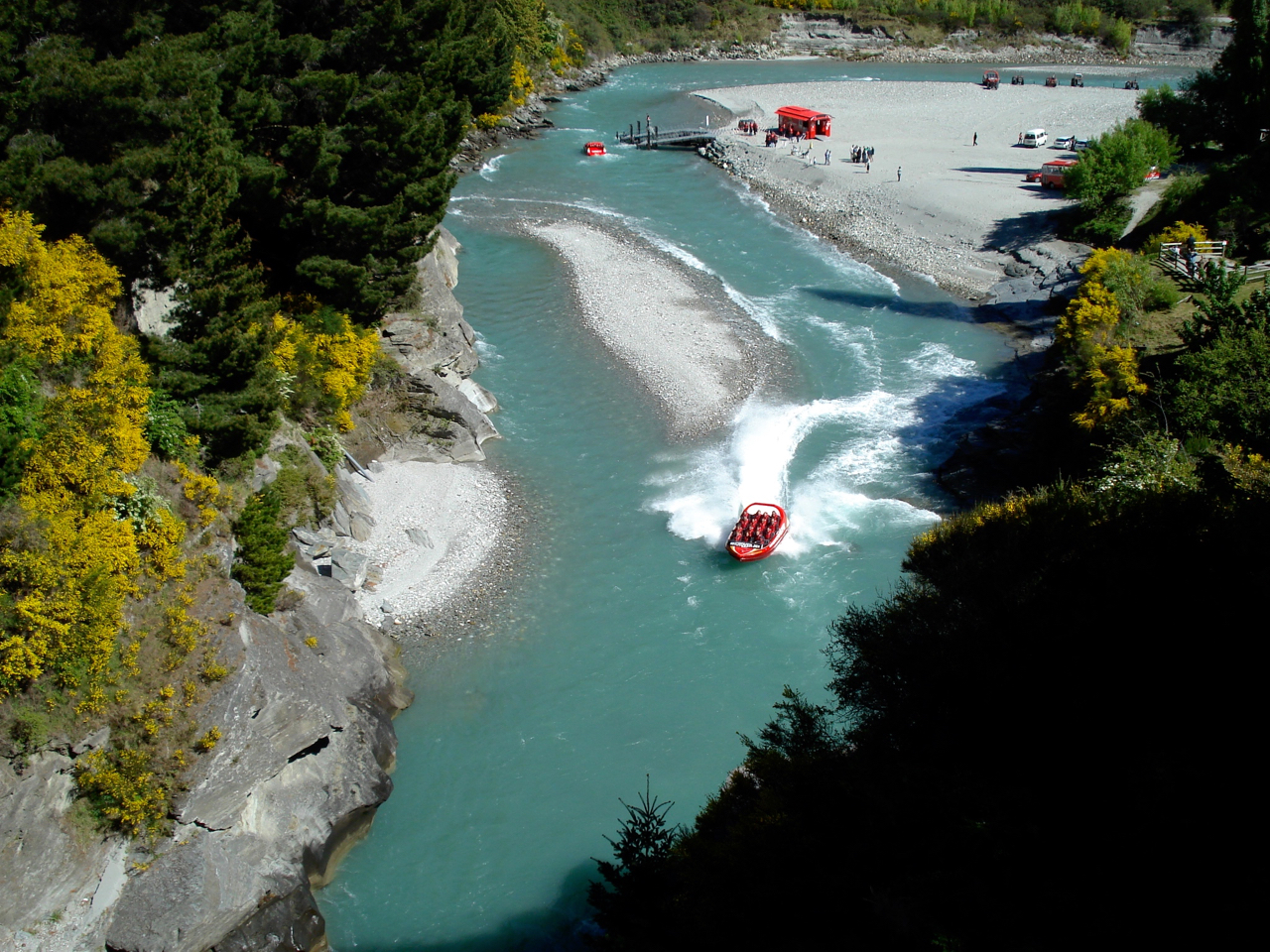 A fun ride on the Shotover River

Finally, we rounded the last bend and could see the dock in the distance, the next group of passengers lined up, waiting to take our places. We started chanting “One more time! One more time!”, but the driver just laughed and pulled up to the dock. He made another joke about getting sick, and pointed to the other side of the dock, where the other boat was pulling up as well. We disembarked, all smiles and laughs, excitedly rehashing the crazy ride we had just shared. It was all we could do to make it back up to the grassy area by the cafe before collapsing onto the ground, the adrenaline seeping out of our systems as the pounding of our hearts slowly returned to normal. Needless to say, a long wait for a jet-boat ride on Locals’ Day was definitely worth it. An afternoon well spent! 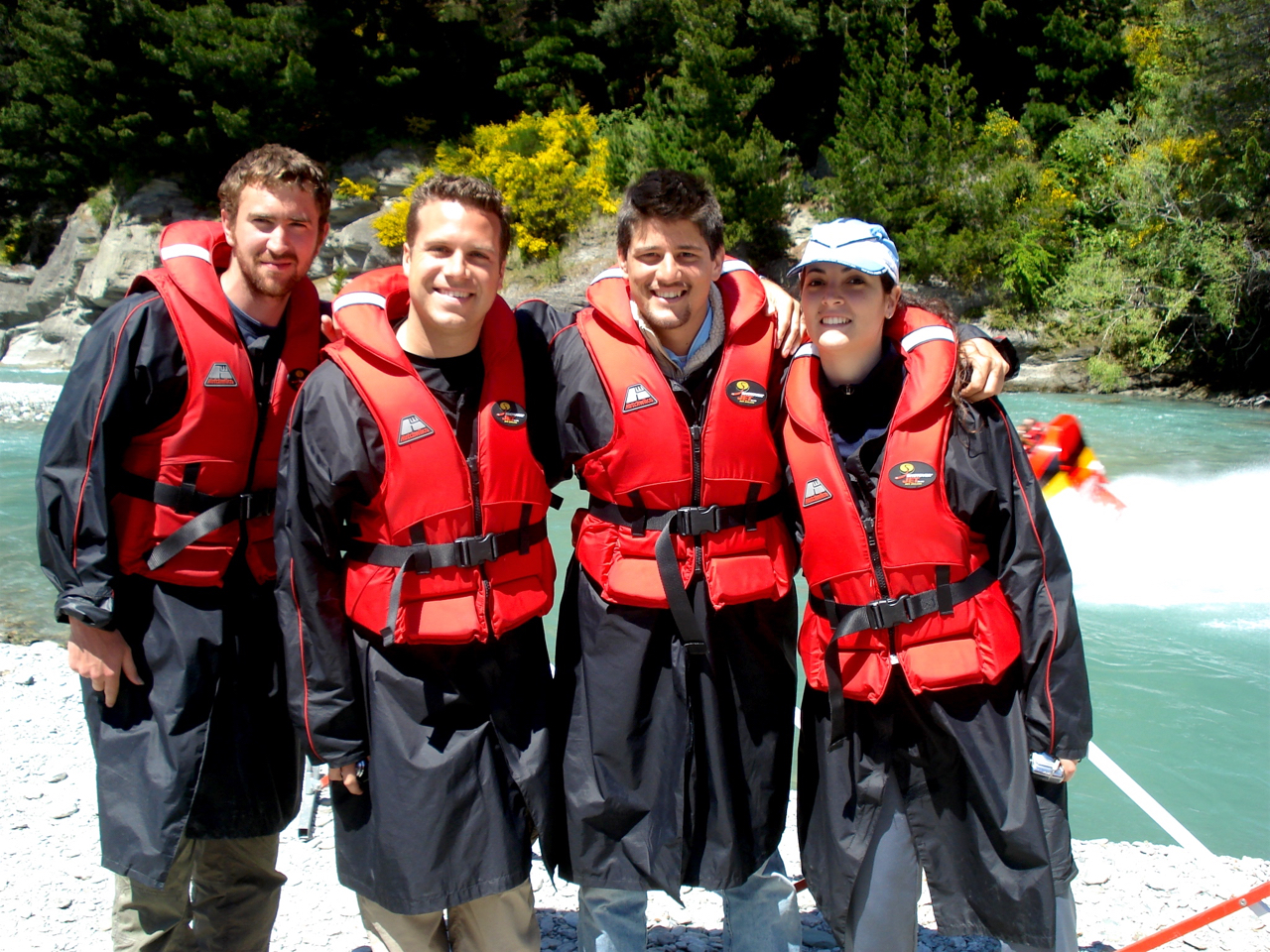 We survived! A great day with Shotover Jet!

To start planning YOUR adventure through New Zealand, click HERE......